I'm going to start transitioning this blog over to a Tumblr. Not that i update that frequently anyway, but lately i've been liking the look and functionality of Tumblr, and i feel like my posts are image-heavy and text-light, which seems to better suit a tumblr format. I'm also looking into building an actual web-site, like a real-ass professional, but that's in the future.
I might do a couple of over-lapped posts, to give the handful of people who actually check the blog a chance to make the move with me (all my love to all of you, all the time always).

I bought a new purse recently, which is something i almost never do. It afforded me an opportunity to personify inanimate objects which... is something i do quite often. It MIGHT be the girliest comic i've ever made?

Nice and breezy this morning! 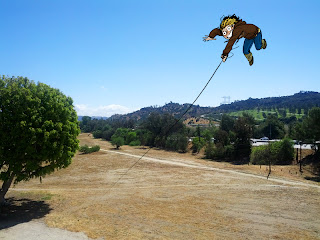 This is what the internet has made me. 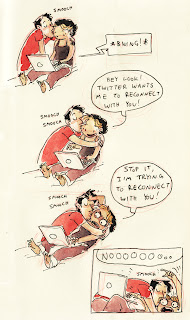 I thought of this pun yesterday (i'm SURE i'm the first one EVER) and spent all day quietly amusing myself with it because entertaining myself is the best! Just kicking myself for not coming up with this in February. I'm all animal puns all the time now. 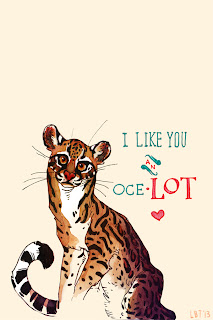 Pen to Paper: My Imaginary Friend

I was really excited when GR Works asked me to contribute to this project! "Pen to Paper: My Imaginary Friend" is a collaboration between the little kids of 826LA (a non-profit creative writing workshop that i've been a fan of for a long time) and big kids who get paid to draw pictures (like me!). We were each given a short story written by one of the kids and asked to illustrate it. My kids story was super weird and fun and gave me a chance to be weird too :) Here's a little sneak peak... 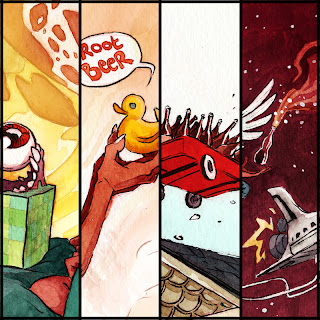 The project just launched a kickstarter with some amazing incentives, please check it out, contribute if you can, share it around if you can't! http://www.kickstarter.com/projects/grworks/pen-to-paper-my-imaginary-friend-childrens-book GR Works will be hosting a gallery show for all the artwork done for the project later this month. More exact info to follow!
Posted by Lissa at 9:58 AM No comments:

There are so many gallery shows happening right now! It can be stressful but i'm SO happy to be a part of so many of them. The Ladies of Animation Show has been extended and is still running for another week, i was in a Star Trek tribute show at Q-Pop that seemed to come and go WAY too quickly (i neglected it here on the blog, make-up post to follow), and up next i'm excited to be a part of a Legend of Korra tribute show! I'm a HUGE fan of the original Avatar series and love watching them expand that world. So here's a preview of my piece for "I'm the Art Show, Deal With It!" hosted by PixelDrip. 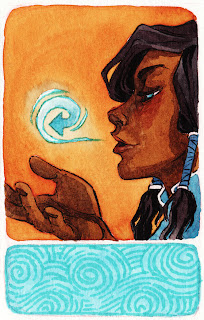 (And yes, there is more to the piece than what's here!) Ticketing info for the show can be found at the gallery link above. Somewhat more practical info can be found in this blog post by show creator Bryan Konietzko (and also features a show pieces from the dangerously talented Claire Hummel)

Guys! I'm in a gallery show this weekend! GR Works in Downtown LA is hosting a Ladies of Animation art show and i was thrilled to be invited to participate. 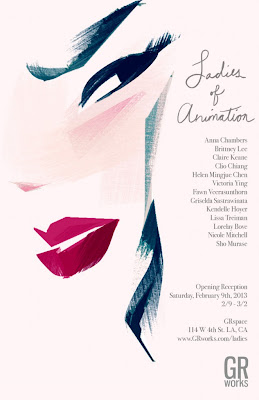 There's so much amazing talent in this show. Here's one of my four pieces, along with some WIP shots: 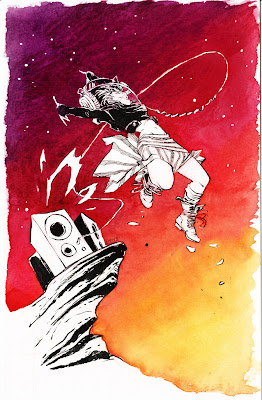 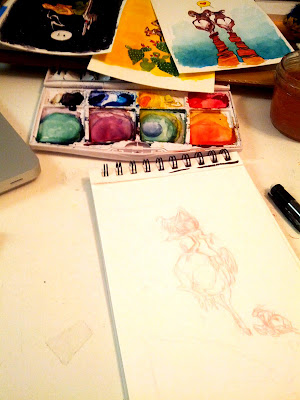 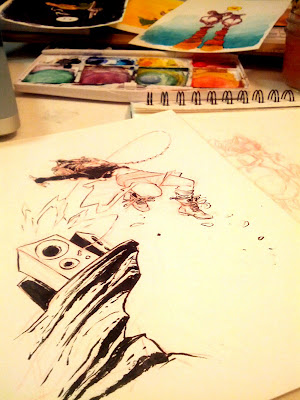 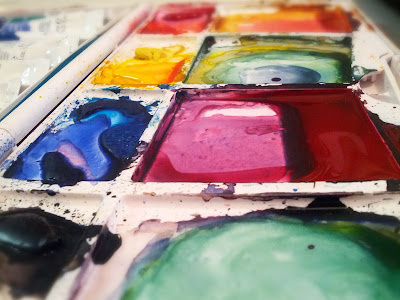 For more info check out the Facebook event page!
Posted by Lissa at 6:52 PM 2 comments:

I've become a lazy Artist on the Internet. I've fallen into the trend of "take a picture of your art with your phone then instagram it and post it on facebook!" which makes actually scanning art and posting it elsewhere fall somewhat lower on my totem pole of priorities. But i try to keep facebook as much of a "real friends only" place as possible for me (apologies to anyone who's tried to friend me on there and hasn't heard back, it's really nothing personal) so i should really branch out. To catch the blog up, here's an insta-dump! Mostly meeting doodles, we've been spending a loooot of time in the story room. 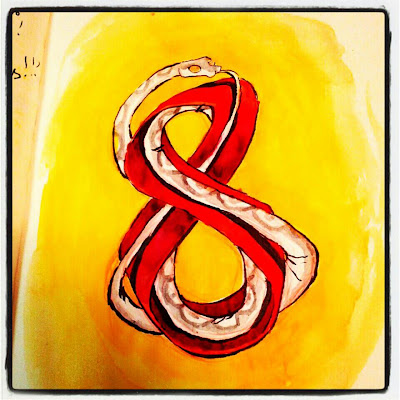 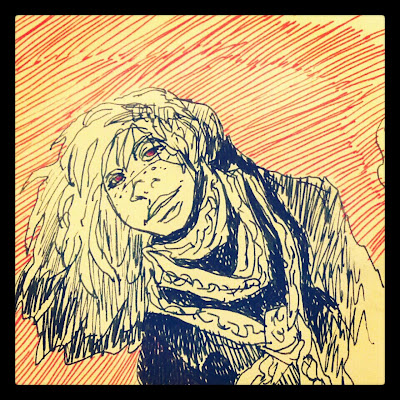 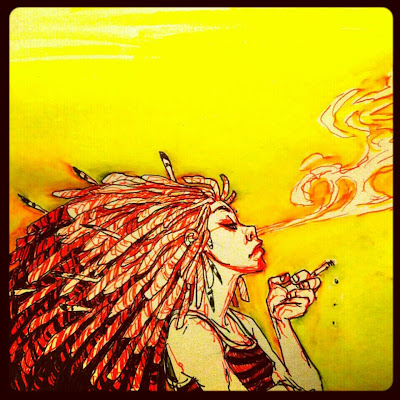 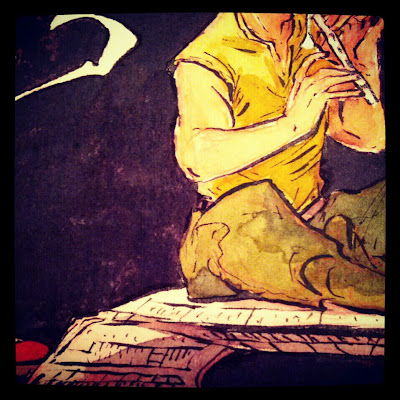 If anyone's interested, i'm "lbtreiman" on instagram! AND... i've even started tweeting. I'm @lbtreiman and there's not much there. I'm new and figuring it out. I'm a baby tweeter. A wee twitt :)
Posted by Lissa at 10:23 AM 1 comment:

I am the law

First blog post of the new year! It's about Judge Dredd! Last night I watched Judge Dredd 3D (in regular D). I gotta say, i dig it, if only for the color design. All saturated primary colors against dark greys, with occasional pops of secondary colors... i spent most of the movie trying to figure out the film language they were setting up. IN JUDGE DREDD! The movie has bloody, badass, cool going for it and not much else, but really that's all it wants or needs. I dig it. 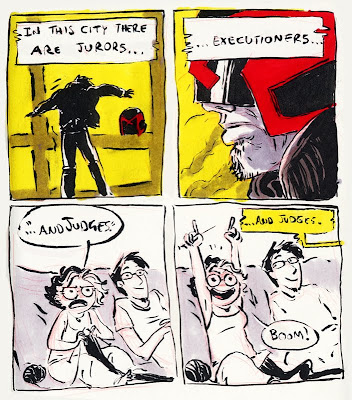 And yes, i WAS knitting a scarf while i watched it :)

It's 2013 now! Every new years i like to do a first and last drawing of the year, kind of a last gasp of productivity and then a good kick start for the year ahead. Here's mine from this year, goodbye to the year of the dragon, hello year of the snake! 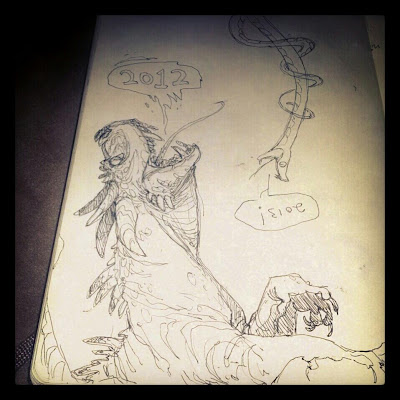