I talk to myself a lot. In private, in public, it doesn't really matter. Sometimes i'll talk out loud, sometimes i'll just gesture to myself or make weird expressions that correlate to whatever i'm thinking. Sometimes i'll do it all at once! Sometimes i'm accidentally staring straight at a stranger while i'm doing it.
I usually refer to myself by my last name.
I know i'm not the only one who does this.
So anyway... 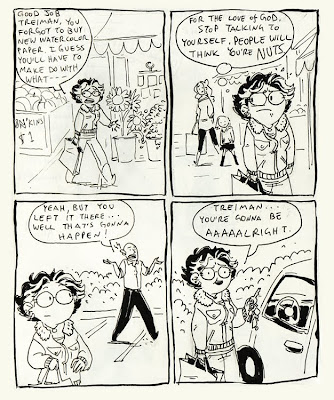 Thank goodness for the blue-tooth talkers who make it easier for us legit nutters to hide in a crowd.

For whatever reason i was having a hard time drawing this comic. Sometimes stuff like this happens easily, sometimes i really have to work at it, and this was one of the latter times for sure. When i got really frustrated at my inability to draw something so familiar to me i drew the following, which i actually find funnier than the comic itself. But then, I'm often amused by my own "antics". 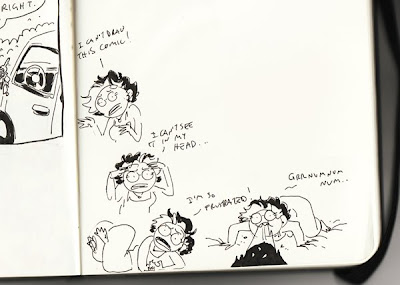 I'm working on a piece for an upcoming gallery show at Q-pop in honor of the 40th Anniversary of Kamen Rider and the 35th Anniversary of the Super Sentai series. Not having actually seen either (not even Power Rangers!) i've been digging into the veritable treasure trove of source material and came out with Electro-Wave Human Tackle, the lady side-kick/romantic interest of one of the Kamen Riders. She's got a pretty fun design and some pretty cool powers, so i thought i'd give her her due. Just practicing drawing her here. 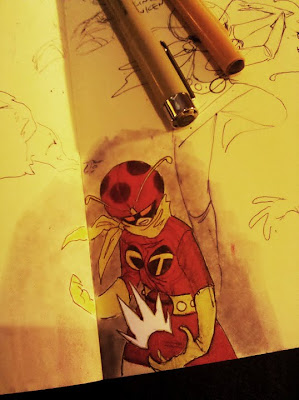 Actual finished piece to exist in the future!
Posted by Lissa at 10:49 AM 3 comments:

Back in the summer of 2005 i interned up at Pixar on W.A.L.L.-E.
I didn't really do any production work, but i got to sit in on story meetings and that was an education in itself. I was only 19 and had just finished my sophomore year of college so i spent most of my time feeling like a freshly hatched scared baby chicklette, but i had a lot of really great experiences that summer and met some really amazing people, many of whom i still see around.

Recent events stirred up something that happened that summer i'd almost completely forgotten about:
One day i was hanging out with the some of the story guys* in the WALL-E pod. I don't remember who all was there exactly. They were cleaning out the mini fridge and there were some beers left, so they decided to finish them off. So now we were all lounging around, middle of the afternoon, drinking beers (except for me, i hadn't really developed a taste for beer yet, and i was only 19 besides) when Steve Jobs walked by: 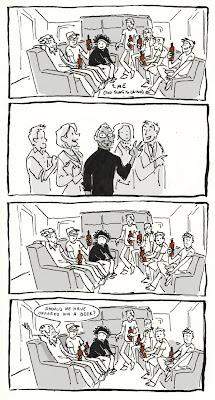 I remember there being some speculation as to what the majority shareholder of the studio would have to say about his employees (and intern) lying around drinking in the middle of the work day, but as he walked by he smiled and waved at us and actually seemed too happy to be there to really care. I have since learned (with gusto) that drinking on the job is quite per the norm at animation studios so in retrospect i'm sure he never gave it a second thought.

I don't have a lot else to say about Steve Jobs. He helped revolutionize the technology industry as we know it, to be sure, but you read things and you hear things and it's clear the man wasn't exactly a saint. Still (as i type this on my MacBook Pro), he inspired a lot of people and certainly invested a lot in the industry that i'm fortunate enough to be employed by, so Rest in Peace, Steve Jobs.

* and i do mean story Guys, there were no girl artists on that crew, or any crew if i remember correctly, with the exception of Brenda Chapman.
Posted by Lissa at 8:47 PM 7 comments: