Submitting this one early, because i have another one in the works that might come a little late. When you balance them out, they'll both arrive exactly on time ;)

This weeks CHARacter DESign Challenge came from Adrian and Emma, or so i am made to understand. The challenge, made seemingly from two words drawn randomly out of a hat, was Telescopic Placebo.
While i understand what each of those words mean individually, it took a little time to fathom what they might mean when taped together like this.
here it is.

O Katamari.
Sitting inside the office
Where i can't get you. 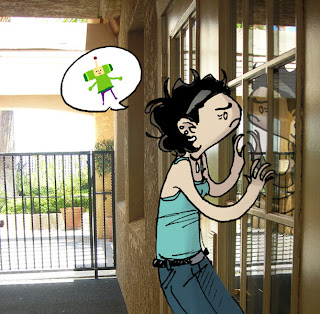 I ordered Katmari Damacy off Amazon.com last weekend. By the time it arrived yesterday the leasing office (where all packages are picked up) had closed. Now it is trapped there, with many other eagerly awaited parcels.

Got some pretty dumb stuff cookin' for this week's CharDes challenge. You stinkers hatched up a wierd one this week. May we all be equal to the burden.

[EDIT]
I have retrieved the package! Katamari Damacy has been received!
Posted by lissa at 3:11 PM No comments:

Old Mermaids ahoy!
First we have ancient mermaids(men).
There's nothing more ancient in the sea than whales. I figure that mermaids (or mermen in this case), when they get old enough, must turn into whales. 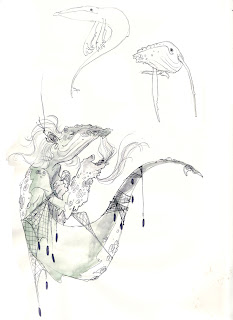 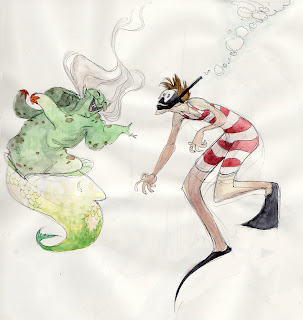 And finally... TOO old mermaids. 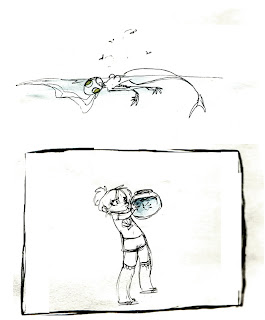 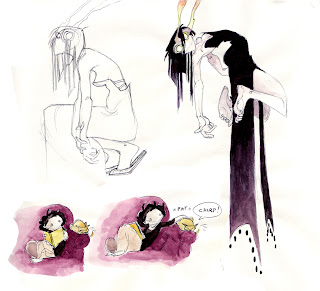 Just some doodles from sick-ville. You know, being sick when you're a kid is great because you can just sit around and watch t.v. (unless you had parents that were of the mind that if you're too sick to go to school then you're too sick to watch t.v. which makes absolutely NO sense). But when you're an adult and don't have cable it totally sucks. I've... been watching a lot of 'Buffy'.
On the other hand, it give me plenty of time to get ready for the CharDes challenge! 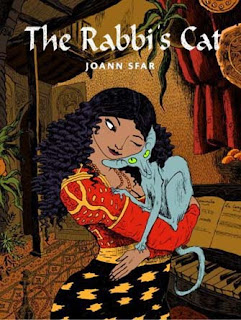 Picked up a copy of The Rabbi's Cat when i pre-ordered my copy of Harry Potter Book 7. I first saw this at a comic book store in Berkely last summer and wrestled with buying it for a while. A month or so ago a friend of mine left a copy of Vampire Loves in Jason's appartment and one by one we all read it and fell in love with it. Once i realized that The Rabbi's Cat was by the same guy i had to go out and get it. Joann Sfar is great, i reccomend anything he's done.
Posted by lissa at 6:41 PM No comments:

Went out to Nova Cafe and Molly Malone's with Kelly, Lars and Jojo the other night. Nova is pretty much the coolest place to eat anywhere. It's this little hole in the wall place right in the middle of the Jewish section of Fairfax, and inside it's decked out floor to ceiling in years worth of collected sci-fi decor. Good food, too. After that we went a couple miles down the street to Molly Malone's, the Irish pub where Flogging Molly first got their start as a bar band. It was fun atmosphere, and okay drinks, but the band playing was non-spectacular and after a while people watching got dull. The same people were standing in front of me, or people that LOOKED like the same people were standing in front of me, so i did a little doodling and after about an hour we left. It was fun, though. I kept hearing about that place and i'd always wanted to check it out.
Kelly's gotten wind of another pub a little closer (?) to us, so i think we're going to have to investigate at some point in the future. Bars seem to make for good gesture drawing, a little more so than coffee shops. In coffee shops you get people having conversations, which is good, but they're always sitting. In bars you get people sitting, standing and leaning, and it's also good for drawing groups of people. that's a thing i've never really thought much about before. In life drawing classes you usually get one person on their own, but not much opportunity to draw them physically interacting with another person.
In any case, my gesture drawing skills have gotten flabby, and it helps me stay in shape.
Similarly, my body has also gotten flabby. i need to get THAT into shape. I bought some bright blue exercise pants :) 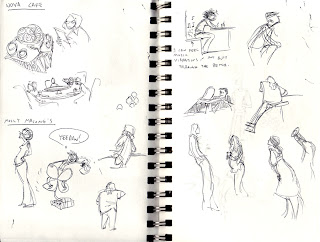 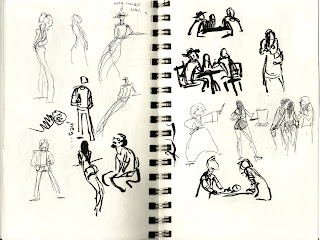 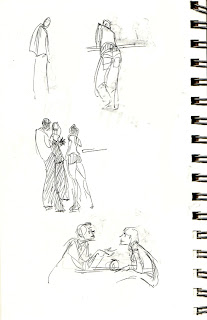 She stole the fish. 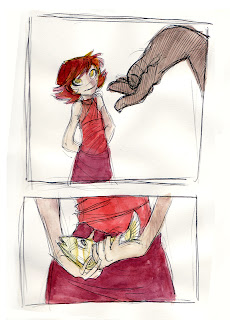 Although one can only wonder why. 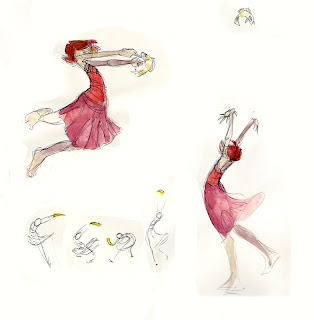 Went to an ASIFA screening of 'Paprika' last night. It's by the dude who did 'Tokyo Godfathers', which i've heard is very good and should see someday.
'Paprika' was pretty schitzoid, and a tad hard to follow, but a cool idea and a lot of fun. In some ways it's the kind of film idea i've always wanted to see realized, only it never made enough sense to i never made it. 'Paprika' never made enough sense, but hey, it got made and i enjoyed watching it :)
If nothing else it's theme song is positively captivating. I've been listening to it on a loop all day. I'd post a sample of it if i could... it's on itunes, go take a listen. 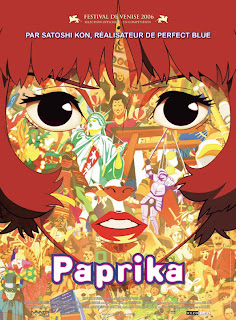