We're having a new microgallery opening today! This is our second one back at the studio since our big public show at Nucleus.
The tragedy in Japan has touched all of us as in the artistic field as much as anybody. Even though the earthquake hit over a month ago, it's impact is still being felt. We decided Japan would be our theme this time around, and all proceeds will be donated to the Red Cross Japanese relief efforts. It will be a silent auction, and by donating through the studio Disney will match whatever we give. It's going to be a good one.
Here are my two pieces! I tried to research the japanese as accurately as i could. If i've made any grievous errors in translation, don't hesitate to point them out. 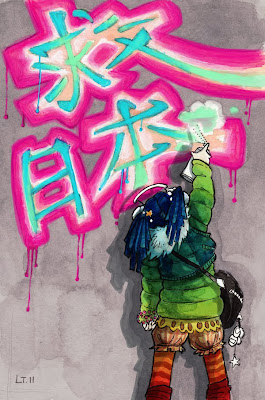 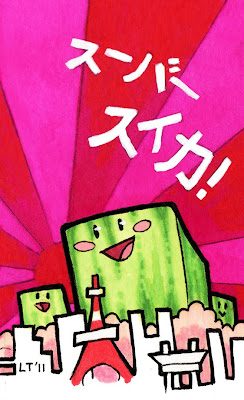 "Super Watermelon"
(EDIT: Thanks to an anonymous poster for the spelling correction. That should read スーパー instead of スーバー )

Because what is more Japanese than a square watermelon? 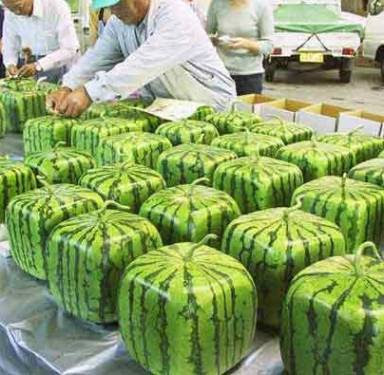 My friend Emma is wrapping up work on her third short film, "Horizon". She asked a bunch of her artist friends to design posters for it, and i was thrilled to be asked to make one as well. Emma's seemingly boundless creative energy and self-motivation as a film maker is nothing short of inspiring.
Over a year later (shameful procrastination!) i finally got it done. 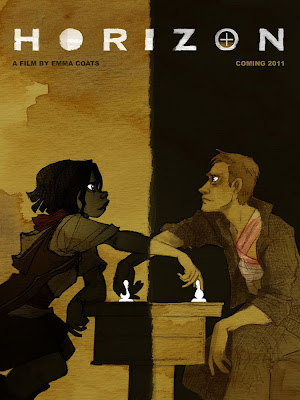 I'm really pleased with the way it came out. Of course the source material held no shortage of inspiration :)
PLEASE swing by the official 'Horizon' Facebook page and check out all the totally rad behind-the scenes stuff that they've been posting!
Posted by Lissa at 11:56 AM 3 comments: